Carcavelos is divided by the Cais de Sodre to Cascais coastal railway line. North of the line is the charming, traditional, quiet, older part of town. It has a small commercial centre, an outdoor market, shops, restaurants/cafes, a church, an ice cream parlour and a cinema where newly released films are shown in English/French with Portuguese subtitles. 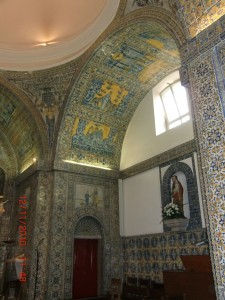 The church’s panels of tiles are famous and an absolute must see. They proved such an attraction that the famous Portuguese writer, Jose Saramago, made a special detour from Lisbon to see them when he undertook a tour of his homeland in 1979. Postcards and reproductions as well as some original tiles and hand painted gifts can be bought from the nearby shop, Ceramica Artistica de Carcavelos.

South of the railway line is the extensive, popular, well maintained beach resort, visited mainly by Portuguese people and surfers but becoming better known to other tourists. It’s used for sunbathing, surfing and paddle surfing (and associated schools run courses for children and adults, hire wet suits and film students as they learn), body boarding, volleyball, swimming and fishing. 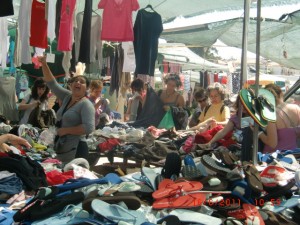 The Riviera centre with a well stocked supermarket, shops and an hotel with outdoor pools  and a small indoor spa/pool. 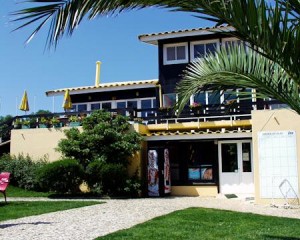 Abla Guest House is closeby and has a pool that is open to non-residents (and affordable accommodation). Bring your own drinks and snacks. The Guest House is part of a charitable institution which works to benefit the local community.

The Riveira hotel’s outside pools (adults and children) is just across the road from the apartment. Sun beds and umbrellas are provided and a bar serves cold drinks.

There are two large, public, sea water pools on the lovely sea-front walk. And there are two more between the nearby seaside resorts of Estoril and Cascias.

A (contested) major new development is planned in the empty section of Quinta dos Ingleses (close to St Julian’s school). The plan is to build 900 homes, a hotel, commercial spaces, a large urban park and more. Development opposers consider it an attack on the environment and people’s quality of life.

Interestingly, this area once housed the Portuguese  HQ of Atlantic Cable & Undersea Communications. The first cable to Cornwall was from Carcavelos in 1870 and to Horta in the Azores in 1893. Links were also made to other stations in Spain, Madeira, Cape Town etc.

The old station house still stands, covered in graffiti. The surrounding empty land is currently used as a temporary car park for beach goers. Old photos of Carcavelos, including one of ‘Casa do Cabo Submarino’ can be viewed in this useful and informative website: carcavelos.com

Development plans for Carcavelos & Parede are discussed here (in Portuguese). The future looks bright for the area.