A trip to the Lisbon coast would be incomplete without a trip to this fantistic town at the mouth of the Tagus. It’s of immense signifiicance both historically and culturally. From here, Portuguese explorers like Vasco de Gama, Diogo Cao etc, sailed on their voyages of discovery and historical monuments commerate their achievements.  It’s now a wonderful area of leisure and recreation with a cultural centre, modern museums as well as a deservedly popular tourist attraction.

The Monument to the Discoveries was designed by Portuguese architect Cottinelli Telmo and sculptor Leopoldo de Almeida and was erected in 1960 on the 500th anniversary of the death of Henry the Navigator (1394-1460), the instigator of the Portuguese adventures into the unknown. It’s a 52 meter high concrete memorial and represents a three-sailed ship ready to depart.

Declared as a UNESCO World Heritage Site in 1983.

The burial place of the famed explorer Vasco de Gama 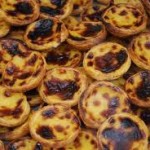 TOP TIP. In summertime the queues here can be long.  You can avoid them by going inside to the beautiful, tiled cafe area. Eat your fill of them there, enjoy a coffee, then order some to take away.