Arriving in Lisbon via the airport, my wife and I caught the airport shuttle service to Cais do Sodre, and even taking this direct route through the city centre took us past some great views of Lisbon. We knew we definitely had to take one of the open top double-decker tour buses around the sights, and with our airport bus ticket we could get a 25% discount on the yellow bus company tickets, so the next day we nipped back into Lisbon’s Cais do Sodre station from Carcavelos to do just that.

About to purchase our yellow bus tickets, we were made aware of the price equivalence of the CitySightseeing Portugal tours (red buses), so by accident rather than design we chose to go on the red bus sightseeing tours – they run both a red and a blue route covering just about all the city highlights. So this comment is really just about the red CitySightSeeing Portugal experience – click on the tour bus image for full details of route etc.

To help us get our bearings and ensure we saw just about everything, albeit from a bus, we decided to cover both the red and blue routes which have 23 stops each on a circular route lasting about one and a half hours (blue route maybe a little less). This would help us be better informed when matching what we saw with recommendations by friends of where to spend most time, and what was in the guide book we had, and the relatively light touch commentary provided in your preferred language through headphones are included in ticket price. 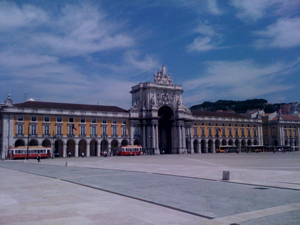 Starting with the red route, which covers more of the central parts of the city, you are stuck by the grand elegance of the building and especially the wide open space which is largely free of signage to lecture you on this or that, or officialdom trying to modify your behaviour. As you move through the squares and streets the mood is so much more uplifting than almost any city centre of the UK, except maybe Edinburgh. Obviously being on holiday and the hot sun helps but I think there’s more to it than that. The Praca do Commercio for example had all the feeling of St Marks Square in Venice but without the business of it all and people moving through the space unhindered. 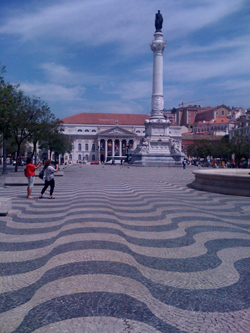 Moving past the wide pedestrianised shopping streets towards the Praca dom Pedro IV / do Rossio, just leaves you itching to get off and walk around, enjoy the space and the understated but grand elegance of it all. And then more elegance as you pass the tremendously ornate Estacao Central do Rossio and up the Avenida da Liberade, with its tree lined grand houses – now designer shops for the well to do.

There’s a funny mix of low key imperial and royal history and a strong sense of citizen and publicly owned open space. The Campo Pequeno bull ring may be a little too far to stop by when walking around so is excellent that it’s included in the tour, as is the prison, but again great examples of pride in civic values. 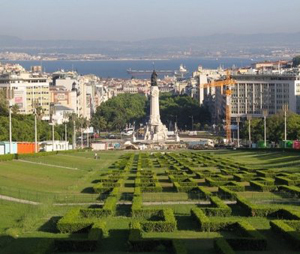 There were so many highlights of this stunningly grand and elegant city tour, but probably the view down from the Parque Eduardo VII summed up the scope of the city and what can be acheived in a short period on foot. The rest of the red route then moves back into the centre and west part of the city via the Basilica da Estrela and Belem to cover the many museums housed there after recent building work.

By contrast the blue route covers mostly the eastern side of the city and the whole area built for the Expo ’98 on the remnants of the docks, including the Oceanario and stunning looking Atlantic Pavilian with capacity for some 20,000 people. The bus then comes back into the centre to cover the Bairro Alto area before completing the loop.

Tickets were €15 per person and are formally valid for 24 hours but as there’s no time stamp on ticket when issued this is practically 2 calendar days (it says 48 hours on bus), with presumably no distinction between working days and weekends for tour bus. Highly recommended as a must do!

This entry was posted in Carcavelos, Lisbon, Portugal and tagged Lisbon. Bookmark the permalink.