The sun was winning the battle for supremacy in the morning sky when I awoke to the sound of water dripping from the leaves of the plane tree in the garden. It’d rained heavily during the night following a magnificent thunder and lightning show. (Nov 12).

I had a leisurely breakfast on the balcony and could’ve stayed there all day as it grew hotter, basking in the warmth and reading. But I dragged myself away. 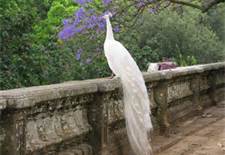 I fancied a longer walk however and decided to head uphill towards Monsanto Forest Park. I soon passed the Lisbon Athletic Club before coming to the end of that road at the Municipal Swimming Pool. I went inside to have a look at the busy pool(s) and to ask for directions.  A young woman and her friend were friendly and helpful. They were also perplexed that I planned to walk to the park and offered me a lift saying they were driving in that direction anyway.

The road was long, uphill and busy – it’d have taken me a couple of hours to walk there! The driver was a student Physiotherapist and spoke excellent English. Her brother had married an English language teacher and she was happy to practice speaking English with me. She dropped me by the entrance to Alto da Serafina advising that I’d get great views of Lisbon from there.  {I learned later that there’s a much easier and more pleasant ‘Green Corridor of Monsanto’ (Corredor Verde de Monsanto) which links the park to Restauradores square and is ideal for pedestrians and cyclists}.

The park is 2,400 acres of protected forest laid out in the 1930’s. The entrance area wasn’t busy – just a few children in the play area and adults sitting in the sun by the cafe. From the view point I could see right across to Ponte Avril 24, the bridge across the Tagus, as well as the towering statue of Christo Rei in the distance. There were also some great skyline views of the city.

Heading back I met a couple carrying a tray full of wild mushrooms. Seems they grow wild in the forest and November is a good time to pick them. They were so enthusiastic about their find and planned to research them at home before (hopefully) tucking in. I also met two older men also picking mushrooms and they proudly showed me the results of their mornings’ work – two plastic shopping bags full of mushrooms!

Walking towards the other side of the park I passed people walking, running and cycling. It’s a very popular place for Lisbonites to exercise in. After a short walk in the other side of the heavily wooded park with mushrooms growing wild everywhere, I returned along the main road until I began to see some good views of the Lisbon Aquaduct. A path around a housing estate led me to a road underneath an arch. The views up and down the arches were good but I couldn’t actually walk along the top path. Seems that pedestrian path was closed because people used to use it as a suicide launch pad!

The aquaduct originally consisted of 58 km of water conduits, 109 arches, 137 skylights and 30 fountains. It dates from 1746, survived the 1755 earthquake and supplied water to Lisbon until 1967. 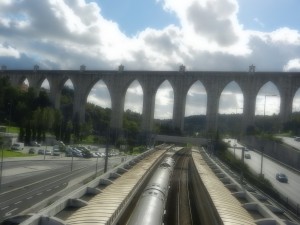 I contemplated following the arches southwards but decided against it ’cause the area felt vaguely threatening with glassy eyed young men hanging around, and the odd police car patrolled. I didn’t want to draw unwelcome attention to myself however so I pocketed my camera and headed towards Campoline station. The views from the bridge in front of the stations afforded some of the best views of the aquaduct over the Alcantara valley.

The Free Waters Museum, close to Rato metro station organises guided visits and tours to the aquaduct between March and November. Seems it’s possible to walk parts of it then and to get some great city views. That’s one for my next trip!

This entry was posted in Lisbon and tagged Aquaducts, Museums, Parks. Bookmark the permalink.