On hearing that we were to visit Carcavelos near Lisbon, our neighbours who visit the delightful town of Tavira in the south of Portugal gave us a cut-out from the Sunday Time travel section on the wonders of Sintra, just up the Lisbon coast. They had been close by when visiting the most westerly point of Europe, but they are in for a real treat when they actually go themselves. I’ve a feeling the hills may test them a little despite being used to the hills of the High Peak in Derbyshire – Sintra is close to the coast but the hills of Sintra are dramatic and steep for sure. 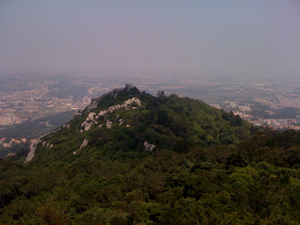 It’s the vantage point of the green and rocky hills of the Sierra da Sintra that that led to the Romans, Moors and later the Portuguese themselves to conquer them as commanding and strategic viewpoints. With the advent of the Lisbon-Sintra railway in the C19th the middle classes have used the relative cool of the hills for retreat in the summer months, a little like Shimla in India where the English civil service would retreat from Delhi in the summer. I think we must have gone on a particularly hot day as it didn’t really seem any cooler for us, but then we did walk up <some of> the hills!

We arrived in Sintra on the coastal route local bus service from Cascais so had been introduced to the dramatic scenery and narrow winding roads. The 434 service leaving every 20 minutes from the train station where we were dropped off was recommended as it went by the Palacio Nacional and onto the Castelo dos Mouros and Palacio da Pena so we duly boarded. Be prepared for something like a fairground ride as it navigates the very hilly terrain and races round tight corners – thank goodness nothing got in the way! 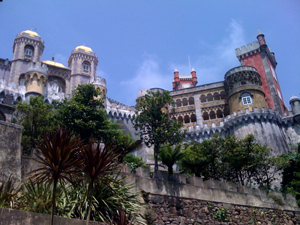 Anyway, we got off to visit the Castelo dos Mouros but as it looked half ruined, and we didn’t want to be time squeezed from seeing the Quinta da Regaleira (highly rated in Sunday Times article and Trip Advisor), so we decided that we’d walk up to the Palacio da Pena to see that first. On reflection, there is enough time to cover all three sites in even a shortish day’s visit, and it makes sense to see the first fortified settlement site to really appreciate the historic importance of the location. Then progress through the Pena Palace which seeks to trump the Moors Castle in prestige, then finally visit the truly wonderful Quinta da Regaleira. 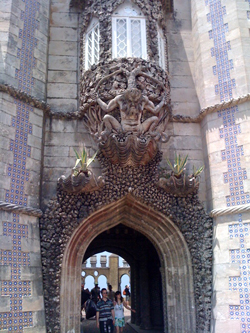 Quite a climb up to the Pena Palace through such dramatic forest, and further up through its grounds, you are presented with a proper fun and fairytale version of a Palace. Built around the remaining Renaissance altar of the chapel, on the ruins of a former monastery which had been severely damaged in the earthquake of 1755, this is a C19th pastiche of Moorish, Gothic, Manueline and Renaissance that just makes you giggle throughout as its sense of play and frivolity.

It’s definitely worth the walk through the castle rooms and to see the interchange of formality and informality, and the ranking of various social and state responsibilities. Such an over the top, fantastical and cartoon like set is hard to consider contemplating, let alone living out as a formal head of state – certainly not difficult to understand why Portugal became a republic in early C20th. 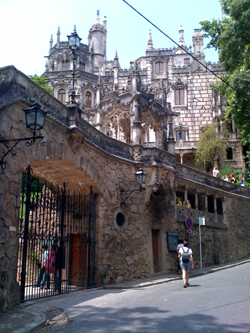 After seeing the fantasy creation of Pena Palace, the strangely under-publicised yet most surprising and enigmatic monuments of Sintra is the Quinta da Regaleira – an absolute pleasure to experience. It starts with the incredibly funny Chapel and tunnels that bring you out either under the main neo-gothic mansion or above the entrance you first went into it. Oh such cleverness of technique involved in its workmanship but also of the imagination to weave it into playing tricks of the mind’s perspective. This place just oozes the mystique of human purpose, concentration of endeavour, and enlightenment principles of man’s domination over nature and control of his own environment.

The mansion is a treasure trove of intricacy, detail and complete dedication to the task in hand with each room being custom designed around particular styles to create an overall tour de force of architectural design overload – you walk away thinking ‘where do they get all their spare time from’? It’s almost impossible to think of anyone today taking the time or effort to develop such exquisiteness, and then you pass another quirky example of the same application to detail and twist of style and substance presented in such an unorthodox way it is somewhat enchanting – especially with the backdrop of the Moors Castle and Pena Palace. 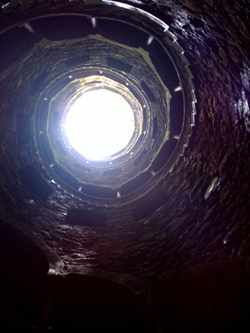 OK, there is a very funny interplay between grandiose symbols of opulence, the most esquisite attention to detail of technique and the mastery of man’s control over nature and his own environment that is very rare and such an amazing giggle. If only the dedication to purpose could be harnessed for more socially useful purposes rather than just very clever expressions of individual excellence the world would be a far better place, but the world is definitely a far better place for having Quinta da Regaleira. And I guess some of the impulse of the creators is that they wanted to express their creativity.

Whatever the impulse for creating such examples of blending human ingenuity with expressing human inventiveness, the stairways of the nine-layered Initiatic Well surely displays this with aplomb. Here is a natural well in a cave structure that in itself is something to marvel at, yet the architects built a staircase within the well to give a form that expresses such domination of our environment that is exhilarating to see. And the structure is almost completely hidden, both in the sense of it being inside a dark shaft from the bowels of the earth to the sky, but also in that it’s almost impossible to find, hidden and obscured from view so the discovery is part of the story. 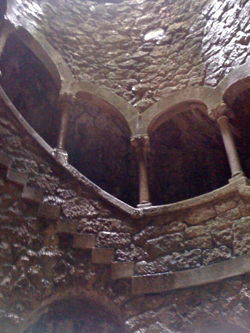 Having struggled to find it though, the reward is delightful, initially magical and finally awe inspiring in grandeur of vision and deployment some 100 years ago. It is almost inconceivable that such a piece of art, design and architecture could ever be produced today, and the question as to why not stays with you beyond Quinta da Regaleira. And being left to explore the tunnels, some in almost complete darkness, is a throw back to what seems like a different age – no injury lawyers standing by to help you make a claim, or unofficial official to tell you what you can and cannot do.

The staircase, descending 27 metres before taking you to a little oasis of calm is meant to draw out your contemplation of the relation between heaven and earth. It certainly does get you thinking, but then there’s a wealth of clever teases and switches to challenge your perception with tunnels and walkways transporting you from one period or situation to another with grace.

Sintra is a place of delightful elegance to compliment your visit to Lisbon and an absolute must see location.

This entry was posted in Sintra and tagged Sintra. Bookmark the permalink.